From 2015, 2015年より、
『マイナーなユーカリ達』は日本語のみでというか、英語にできないだけですが、ユーカリに関する栽培記録を掲載しています。
Japanese edition is "Eucalyptus morrisbyi... in Japan - by Osakano Jie" in GIT.
The English version is "Slow Life - Tidings of four seasons".
I am weak in English. For that reason I aim at something like picture book, that is represented by words of a little.
『スローライフ‐四季の便り』は、
英語版としていますが、タイトル通り『四季の便り』として、日本語と英語の併記で四季折々のユーカリの姿を掲載しています。
『Aromaphloia アロマフロイア』では、バラやアロマオイルなどユーカリ以外のものを掲載しています。

A leaf of E.Morrisbyi snuggles up, and heart-shaped. 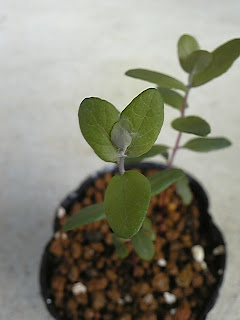 The eucalyptus get through winter in the plastic greenhouse that I remodeled the water tank into. 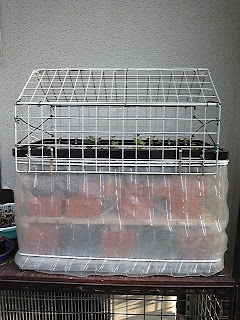 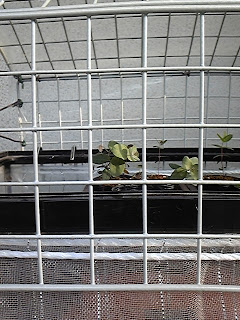 The eucalyptus catches the cold wind directly because a stem is outside a water tank, now.


The temperature in the water tank have been up between +10 and +15 degrees with sunlight.

This Eucalyptus Morrisbyi is 2 month after seeding. 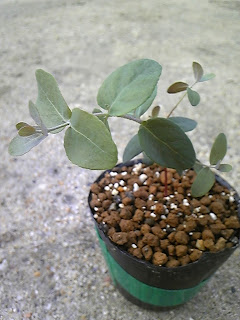 I am worried about the depth of the bow.
When a branch grows up and compares it with Morrisbyi of the one month after seeding, Morrisbyi is growing up. 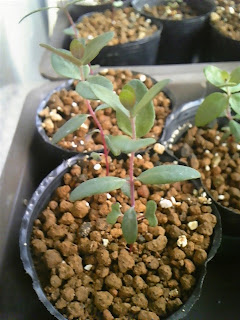 The small seedling grows quickly and healthily, too.

Morrisbyi of three pieces of leaves 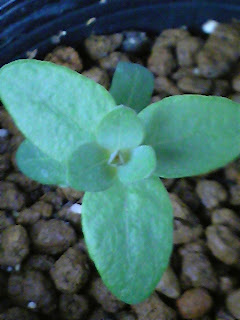 This is E.Morrisbyi of three pieces of leaves. 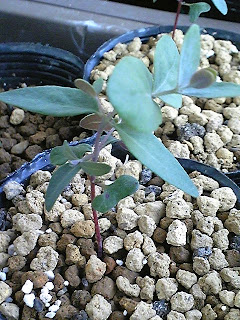 As for the thing which did variation in this way, the breeding seems to be slow when compare it with normal E.Morrisbyi.
投稿者 Osakano Jie 時刻: 11:40 0 件のコメント:

It is Morrisbyi of one month after seeding. 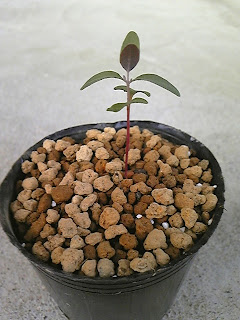 The speed of the growth is different by an individual. 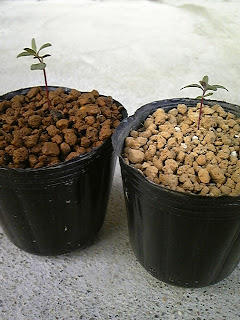 A survival rate of the seedlings that transplanted is 70-80%.

The seedling that a root was damaged dies by the next morning.

I left one or two seedlings in the pot which I transplanted and put right it.
投稿者 Osakano Jie 時刻: 10:39 0 件のコメント:

I made seeding, and about 1 week passed and germinated.

Leaving the thing which germinated in a center, I pulled out the remainder.
There is the pot which left two seedlings.

The seedling which I pulled out prepared eight pots by addition and planted it.
I transplanted three seedlings per a pot.
Pot is finally 20 pots.
投稿者 Osakano Jie 時刻: 0:15 0 件のコメント:

This is a package of the seed of E.Morrisbyi.

Because the seed was small, it subdivided. Between 4 grain and 7 grain per 6 centimeter pot.
If germinating as a rate of germination of 50%.
2 or 3 seedling per pot are the best if they germinate.

The soil for seeding is beaten by sprinkle water.
The reason that I made four laminar structure is to stabilize the seedling which germinated.

In addition, I hope that it is fixed in a loam well when a root was made.

If a seedling grows, I just transplant it in a big pot.
When I move it into a big pot if I do it this way, I do not injure a root.

The soil for seeding is soil for exclusive use of the seeding (a herbaceous cutting) mixing the iron ingredient.

The seed is sorted to a small sack so that a number becomes uniform.
It equally sows it to the 6 centimeters pot.

By the way, I do not advance on schedule.
There is the thing that a seed fell with a lump from the small bag into a pot .
I cannot distinguish the soil from a seed when I put in a seed.

I sprinkle the powder of the loam to fix a seed after having put in a seed.

I received advice that The seed sop the liquid which weakened pyroligneous acid to 2,000 fold with water before seeding that to make germination better.

Because there was not pyroligneous acid, I carry it out with bamboo vinegar liquid.

During liquid making, a needle came off, and it was weakened bamboo vinegar liquid to 1,000 fold.

After making seeding, I was sterilization of the soil and dipped it into bamboo vinegar dilution water for 12 hours.

The later management is watering and be put into place in the shade.
投稿者 Osakano Jie 時刻: 18:34 0 件のコメント:

The summary of Eucalyptus Morrisbyi is as follows.

I seem to be strong in cold if I think that it is the plant of this neighborhood.

The cold-proof temperature changes in the condition of the ground planting and potted, and there is an individual specificity, too.
It can do nothing but manage while seeing the appearance.
投稿者 Osakano Jie 時刻: 11:41 0 件のコメント:

E.Morrisbyi was an endangered species

Morrisby's Gum (Eucalyptus Morrisbyi) was an endangered species until just before that.

It is not searched even if I look for it with Eucalyptus by 2009.02 red lists of the IUCN.

However, Morrisbyi was EN (Endangered) until just before.

When I examine it,

It has two natural populations on the eastern shore of the Derwent River valley in south-eastern Tasmania.
Just some 2000 specimens of Morrisby's Gum are known to survive in wild populations, as its main habitat was cleared for other uses by early settlers many moons before the trees were discovered.

It was one piece of photograph that I wanted to bring up Morrisbyi.

This is a photograph of Forestry Tasmania/Nursery & Seed Centre of the state government direct control.

The purple round leaf was pretty. And I did not forget it.


According to explanation of Seed Centre,

Eucalyptus morrisbyi ( Morrisby's Gum )
This is a rare species found in several small stands on the outskirts of Hobart.
It is ideal for ornamental planting and windbreaks on sandy, coastal sites.
It is also known to be very cold tolerant and has foliage suitable for the florist trade.
Price (inc GST): Packet $3.50,10g $12.23

I requested an acquaintance for the ordering of the seed.
投稿者 Osakano Jie 時刻: 16:01 0 件のコメント:

Nice to meet you.

Nice to meet you.
My name is Osakano Jie. 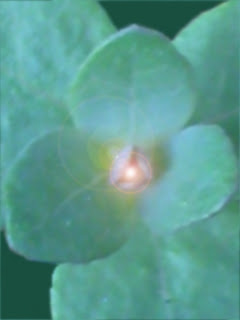 This blog is a record that grows an off-the-beaten-path Eucalyptus in Japan.

Thanks and best regard. 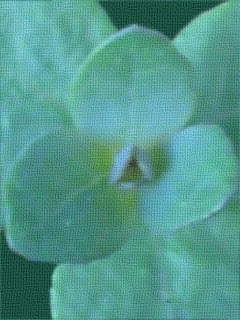 Fragrance of the flower, fragrance of the tree, The space with the fragrance of nature is healed, but how about you?
I am a grandpa of Osaka that is being healed by Eucalyptus, Rose and Aroma oil.
花の香り、木の香り、自然の香りがある空間は癒されます、あなたはどうですか？
私はユーカリ、バラ、アロマオイルに癒されている大阪の爺さんです。